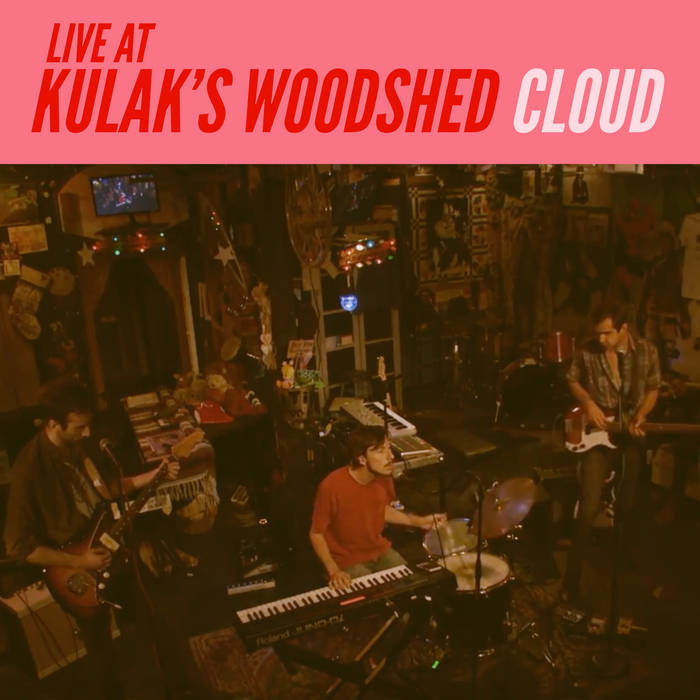 'Live at Kulak’s Woodshed' is brief but breathless audio and video recording from Cloud (Tyler Taormina & friends). Recorded during the 'Plays with Fire' (musicbycloud.bandcamp.com/album/plays-with-fire) period, this three piece recording sees Taormina perform “Happer’s Laugh” and “Comet Happer” alongside powerful stripped down renditions of 'Comfort Songs' (musicbycloud.bandcamp.com/album/comfort-songs) material “Authorless Novel” and “Mother Sea”. The live album is accompanied by a high quality multi-camera video of the full set in this gorgeously strange performance space in Northern Hollywood.

"I’ve been playing the songs of Cloud in various formations for a little over a decade now. The project began with me alone playing the piano and the drums— one with my right hand the other with my left— a style I had came upon completely on accident during a piano lesson when I was thirteen years old. I was trying to explain what the beat and melody together would sound like to my neighborhood piano teacher when I fetched a floor tom in the other room. I was deemed “piano-drum kid.” This was the working method of the first three Cloud records: Elephant Era, Rocket and lastly Comfort Songs where I became increasingly interested in production value at the cost of being the piano-drum kid. I began bringing in drummers for parts I couldn’t do with just my left hand and on the next record Zen Summer abandoned the methodology all together to build songs on stage solely through live loops. Throughout the years I’ve had many collaborators involved with Cloud, two of the most prominent being Jonathan Davies and David Yorr. Our first show together was just after Comfort Songs was released in 2012— it’s very rare that Cloud ever plays live. Each record saw around 5-10 live performances, if that. A noteworthy performance was in 2014, after reading a review criticizing Zen Summer for being too similar to Animal Collective. I played a show only hours later at a venue called Lot 1 in Los Angeles where Dave Portner stood in the very front row before an audience of maybe thirty people. I began editing the setlist in my head thinking I couldn’t play a song like "Mantra One” before just saying fuck it and playing one of the better live shows of that album. I was quite relieved to hear his “Cool set, man” afterwards…

Cloud Live at Kulak’s Woodshed is almost literally the only document of the band's live performance. The bizarre and enchanting studio space in Valley Village was equipped with a five camera setup involving jibs, sliders and a small camera crew around the woodshed. We invited a few friends to come to the recording process and had prepared a set featuring tunes from Comfort Songs, Plays with Fire, and the few remaining songs yet to be released. Other acts including Oren Pine and Mines Falls played as well that night creating a cozy, friendly atmosphere. The recordings for Cloud’s set were mixed and mastered by the wonderful Shaun Oppedisano. I’m quite glad that everything fell into place and that this is the live performance that Cloud can be remembered by. Although the band is primarily a studio effort, we’ve had a tremendously good time playing the few chances we got around to doing so. Thanks for listening." - Tyler Taormina, March 2019

“The brevity of the album, condensed from several years’ work, actually renders it utterly enigmatic, like a lifetime reduced to a random clutch of snapshots. On Plays With Fire, however, Taormina’s songs are blistered but precious polaroids, glue barely holding them onto the pages of a family album.” – Gold Flake Paint

“A spiritual journey through intimate darkness, a poignant and beautiful experience of vulnerability and solitude.” – Atwood Magazine

“There are certain records which manage to replicate, musically, serotonin release. Then there are records that contextualise this physical rush within the throws of human experience: friendship, love, memory and the swathes of melancholy that embrace our lives like a sleep. (Plays with Fire) falls dreamily into the latter category.” – London in Stereo

“Begins with the picturesque opaqueness of its predecessor, but quickly blows over into a sunny spring morning, exposing a field’s worth of indie-pop blossoms that teem with vibrant colors and exuberant lifeforms. There’s not a cloud in sight.” – The Alternative

“A madcap romp through far-flung styles and psych-addled planes of existence.” – The Line of Best Fit

“Cloud has been, and always will be, a project about navigating conflicting, hefty emotions, and this process just can’t be done without the help of close friends. “Two Hands Bound” brings four friends into the fold as Taormina explores the burnout that can accompany overworking oneself, but it doesn’t sound labored-over at all; instead, it’s about as effortless as psychedelic music gets.” – POST-TRASH

“Blissful unease defines Cloud. On Plays with Fire, much of the lyrics are somehow simultaneously hopeful and pessimistic, with our narrator hanging out with friends while feeling antisocial or seeking love when he has none to give.” – The 405

“…by funneling this through the prism of lush-but-lo-fi pop, the melancholy is at once accentuated and transcended, the often soaring instrumentation lifting what would otherwise be morose thoughts and consuming worries into something almost otherworldly.” – Various Small Flames

Mixed and mastered by Shaun Oppedisano

Recorded live at Kulak's Woodshed in North Hollywood, California on the 27th of April 2018.

Some of these songs were covered on "The Desperation Club - A Cloud Tribute Compilation" (musicbycloud.bandcamp.com/album/the-desperation-club-a-cloud-tribute-compilation).