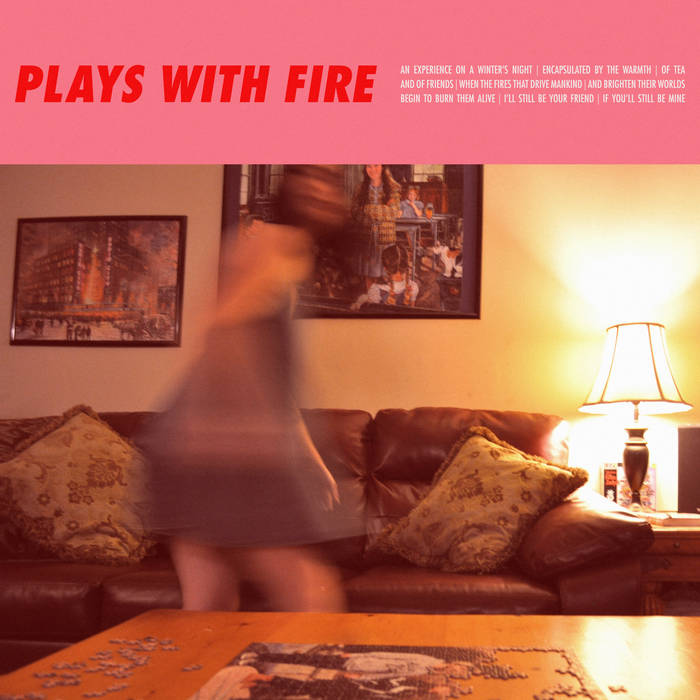 Trev Elkin “now it’s just me in the dark / now it’s just the dark in me”
www.goldflakepaint.co.uk/cloud-plays-with-fire-review/ Favorite track: Heartfluttered.

Jamie (Audio Antihero) Likely the last album from Cloud. It's a beautiful thing. If you enjoyed "Comfort Songs" or "Zen Summer" then you should immerse yourself in this. Favorite track: Oh, So Juvenile.

"Plays with Fire" is the new and likely final full length album from Cloud. It's something very different to 2013's "Comfort Songs" or 2015's "Zen Summer." It was released March 9th by Audio Antihero Records and is available on vinyl or as a lossless download.

“We all listened to this record for the first time on February 17th, 2017 in my Los Angeles apartment in the pitched black darkness, no cell phones. The music was blasting loud and there was barely enough room for everyone to sit on the floor of my living room where the cover photo was taken. Something was mov-ing around over our heads in the darkness, it felt right, like an angel of sentimentality. When the album was coming to its close I sensed that something tremendous was ending along with it, but I had no idea as to what…” - Tyler Taormina

"Astoundingly accomplished…taking his black parade out of the basement and into the streets.” - Pitchfork

“The brevity of the album, condensed from several years’ work, actually renders it utterly enigmatic, like a lifetime reduced to a random clutch of snapshots. On Plays With Fire, however, Taormina’s songs are blistered but precious polaroids, glue barely holding them on to the pages of a family album." - Gold Flake Paint

"There are certain records which manage to replicate, musically, serotonin release. Then there are records that contextualise this physical rush within the throws of human experience: friendship, love, memory and the swathes of melancholy that embrace our lives like a sleep. (Plays with Fire) falls dreamily into the latter category." - London in Stereo

"Keenly characteristic of the current season...begins with the picturesque opaqueness of its predecessor, but quickly blows over into a sunny spring morning, exposing a field’s worth of indie-pop blossoms that teem with vibrant colors and exuberant lifeforms. There’s not a cloud in sight." - The Alternative

"A madcap romp through far-flung styles and psych-addled planes of existence." - The Line of Best Fit

“Reminiscent of Panda Bear or Toro Y Moi, the gentle arrangement is matched to a delicate vocal which hints at something darker.” – Clash Music

”Bright-eyed, wondrous…he sounds like he possesses the keys to another universe.” - DIY Mag

"Cloud has been, and always will be, a project about navigating conflicting, hefty emotions, and this process just can’t be done without the help of close friends. “Two Hands Bound” brings four friends into the fold as Taormina explores the burnout that can accompany overworking oneself, but it doesn’t sound labored-over at all; instead, it’s about as effortless as psychedelic music gets." - POST-TRASH

“It's the sound of someone facing up to the age-old problem of growing up too soon and all the trials and tribulations that come along with that.“ - Drowned in Sound