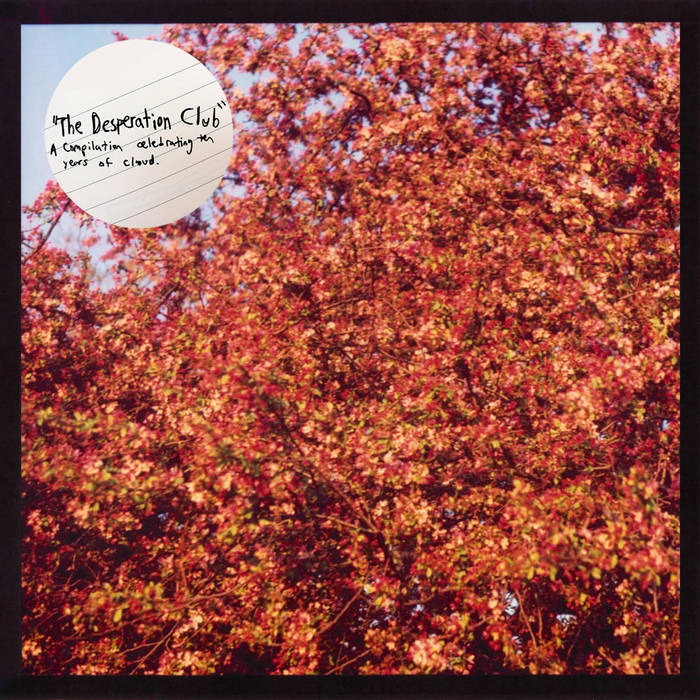 Jamie (Audio Antihero) I'm so happy with how this whole thing came out. Thank you everyone <3 Favorite track: Cherry Dip.

Following Cloud's recent final album, Plays with Fire (musicbycloud.bandcamp.com/album/plays-with-fire), we're excited to share this tribute to and celebration of ten years of Cloud.

This is a collection of songs written by Cloud over the past ten years. The recording project by Tyler Taormina has always been in his own words, “an amateur effort, meaning one done of love and not of careering, amongst a group of friends who feel too much and can’t get enough of each other. The records were made amongst loved ones and the only people who listened to them for a long time were my best friends, those are the people I was writing for.”

His 2013 album, Comfort Songs, featured a manifesto entitled the “Desperation Club” written for those who Taormina felt a kinship with in the aforementioned “feeling too much.” After ten years of Cloud, the band has decided to bring it to a close the way it began, in basement recording studios with a revolving door of friends and local heroes laying down the tracks on Cloud albums each summer. What better way to bring the chapter to a close than to hear the Desperation Club in song, all together, celebrating a suburban community bloomed to become so much more.

"This has been an incredibly warming and strange experience over the past few months for Jamie from Audio Antihero and I to hear covers from our friends coming in. Each one brought to me a sense of nostalgia for the song being covered, when it was written/recorded or simply remembering the fact that the song had existed. And laced with that feeling was the comforting presence of a friend who was singing the new version, their interpretation of the tune many times actually better performed than the original versions, some of which date back to when I was 18 old. I’ve heard all of the covers once and had a really intense experience nearly every time I heard them. I’m not sure if I can hear them all again but I know the impressions they’ve left on me are enormous and speak volumes to the talent of the friends that I’ve made throughout the years.

I’m quite glad we did this for a few reasons, and I must say the main reason is to prompt these friends of mine to keep making as much music as they possibly can before we all get old and boring. <3

Thanks everyone for contributing and for listening and supporting Cloud over the years. For new listeners, I hope that this compilation can serve as a guide to some of the tunes we’ve been brewing up over the years." - Tyler Taormina / Cloud

"Astoundingly accomplished…taking his black parade out of the basement and into the streets.” - Pitchfork

“The brevity of the album, condensed from several years’ work, actually renders it utterly enigmatic, like a lifetime reduced to a random clutch of snapshots. On Plays With Fire, however, Taormina’s songs are blistered but precious polaroids, glue barely holding them on to the pages of a family album." - Gold Flake Paint

"There are certain records which manage to replicate, musically, serotonin release. Then there are records that contextualise this physical rush within the throws of human experience: friendship, love, memory and the swathes of melancholy that embrace our lives like a sleep. (Plays with Fire) falls dreamily into the latter category." - London in Stereo

"Keenly characteristic of the current season...begins with the picturesque opaqueness of its predecessor, but quickly blows over into a sunny spring morning, exposing a field’s worth of indie-pop blossoms that teem with vibrant colors and exuberant lifeforms. There’s not a cloud in sight." - The Alternative

"A madcap romp through far-flung styles and psych-addled planes of existence." - The Line of Best Fit

“Reminiscent of Panda Bear or Toro Y Moi, the gentle arrangement is matched to a delicate vocal which hints at something darker.” – Clash Music

”Bright-eyed, wondrous…he sounds like he possesses the keys to another universe.” - DIY Mag

"Cloud has been, and always will be, a project about navigating conflicting, hefty emotions, and this process just can’t be done without the help of close friends. “Two Hands Bound” brings four friends into the fold as Taormina explores the burnout that can accompany overworking oneself, but it doesn’t sound labored-over at all; instead, it’s about as effortless as psychedelic music gets." - POST-TRASH

“It's the sound of someone facing up to the age-old problem of growing up too soon and all the trials and tribulations that come along with that.“ - Drowned in Sound

**ARTIST LINKS & CREDITS WITHIN THE TRACKS**